I came across the Tuxedo Computers InfinityBook last year at the Open! Conference where Tuxedo had a small booth. Previously they came to my attention since they’re a member of the OSB Alliance on whose board I’m a member. Furthermore Tuxedo Computers are a sponsor of the OSBAR which I’m part of the organizational team.

OpenBSD on the Tuxedo InfinityBook

I’ve asked the guys over at Tuxedo Computers wether they would be interested to have some tests with *BSD done and that I could testdrive one of their machines and give feedback on what works and what does not - and possibly look into it.

Within a few weeks they shipped me a machine and last week the InfinityBook Pro 14” arrived. Awesome. Thanks already to the folks at Tuxedo Computers. The machine arrived accompanied by lot’s of swag :)

The InfinityBook is a ver nice machine and allows a wide range of configuration. The configuration that was shipped to me:

I used a USB-stick to boot install63.fs and re-installed the machine with OpenBSD. Full dmesg.

The installation went flawlessly, the needed intel firmware is being installed after installation automatically via fw_update(1).

Out of the box the graphics works and once installed the machine presents the login. 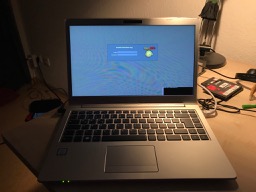 When X starts the display is turned off for some reason. You will need to hit fn+f12 (the key with the moon on it) then the display will go on. Aside from that little nit, X works just fine and presents one the expected resolution.

External video is working just fine as well. Either via hdmi output or via the mini displayport connector.

The buttons for adjusting brightness (fn+f8 and fn+f9) are not working. Instead one has to use wsconsctl(8) to adjust the brightness.

The infinityBook has built-in ethernet, driven by re(4)

And for the wireless interface the iwm(4) driver is being used:

Both work as expected.

Neither suspend nor hibernate work. Reporting of battery status is bogus as well. Some of the keyboard function keys work:

The azalia chipset is being used for audio processing.

Works as expected, volume can be controlled via buttons (fn+f5, fn+f6) or via mixerctl.

Can be controlled via wsconsctl(8).

So far I must say, that the InfinityBook makes a nice machine - and I’m enjoying working with it.